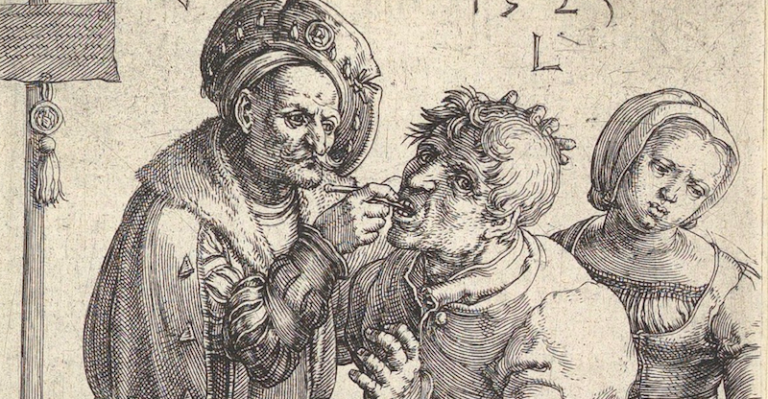 Jean-Baptiste Denis was still alive—in fact, he was only 42—when, in 1685, Charles Allen published instructions on how to transplant a tooth. Allen’s book, The Operator for the Teeth, was also the first dentistry manual written in the English language, although the word “dentist” didn’t exist yet. The tooth transplant was very simple. A surgeon would strap down their recipient “in some convenient place,” tie their legs together and lodge open their mouth. Next to them, similarly restrained, would be a donor whose teeth best matched the size and shape of the recipient’s. Allen offered a few suggestions for where a dentist might find suitable teeth: dogs, sheep, goats, or baboons.

When ready, the surgeon would take his knife to the restrained baboon, say, carve out one of its teeth, leaving a bit of its gum still attached. He’d then, as quickly as possible, draw the patient’s rotten tooth and immediately plug the gap with the baboon’s. With time, the baboon’s tooth and gum would knit itself into the patient’s mouth. You could use another human as a donor, Allen advised, but this would be “inhumane,” since the “reparation” of one mouth requires the “ruine” of another. But “I do not question in the least,” Allen assured his readers, that whatever species the transplanted tooth came from, it “would unite to the gums and jaw bone, and in a little time become as fast as the others.”

We have no evidence that any baboons, dogs or goats ever graced Allen’s dentist chair—or that he performed any transplants at all, for that matter—but when he was an apprentice, he witnessed something that persuaded him they would work. One day, he wrote, a lady came to see his master to have a tooth removed, convinced she had one too many. The old surgeon peered into her mouth and told her not to worry—she had the correct number of teeth. But she insisted there was an extra tooth. So, no doubt causing a great deal of pain, Allen’s master wrenched out the tooth she indicated only to pop it straight back in, presumably after first waving it in front of the woman’s face for her edification. Within a few weeks, the replanted tooth had reunited with the woman’s mouth.

Given the technical simplicity of the operation, it’s probable that specialists like Allen transplanted teeth around this time, and maybe even earlier, though we have little hard evidence. Even if surgeons performed tooth transplants in extremis, the majority of the population relied on professional tooth drawers, whose remit was limited. As a licence granted in 1557 says, they were entitled to “drawe teethe and to make cleane teethe and no more.”

Charles Allen placed himself in another category altogether. He was no common tooth drawer, but an “operator for the teeth.” He advised patients on hygiene, suggesting they brush their teeth once per week with a mixture of powdered coral, rose water and dragon’s blood (a resin, for polish). And, in addition to the usual tooth pulling and cleaning, an operator for the teeth could fit false teeth made from walrus, elephant or hippopotamus ivory. Allen’s tooth transplant was, in fact, supposed to be a “natural” alternative to the “artificial” teeth he already provided.

Allen’s vision of a future where animals sacrifice their teeth for the health of human mouths never came to pass. But in Paris, in the early years of the eighteenth century, the groundwork was laid for a boom in human—human tooth transplants. It all started with Pierre Fauchard, then a navy surgeon. He wrote about one of his patients, a captain, who asked for a troublesome canine tooth to be removed.

Not wanting to spoil his smile, though, he also asked if it could be replaced. Inspecting the “donor” tooth, however, he noticed it was too big for the captain’s mouth, but he went ahead anyway, filing it down to be a better fit. The captain and his miserable companion marched out and Fauchard carried on with his day. “Upon seeing him again eight years later,” Fauchard wrote, “the captain assured me that the transplanted tooth had lasted six years” before it decayed.

This modest success—and no doubt others like it—earned the tooth transplant a spot on a new menu of dental treatments devised by Fauchard in his two-volume Le Chirurgien-dentiste,  ou Traité des dents (“The Dental Surgeon, or, Treatise on the Teeth”). Along with his tooth transplant, Fauchard also invented the ideas and tools for filling teeth, filing them and applying braces to straighten them. As well as these painfully familiar procedures, he included treatments that have thankfully since fallen out of favor, such as washing the mouth out with urine. This new kind of specialist surgeon he called a dentiste, and the name stuck, making its way into English as “dentist” twenty years or so later.

One of the most common causes of tooth decay at the time was supposedly a tiny creature called a tooth worm that would find its way inside your teeth. It would wriggle around, nibbling on your pulp until it caused ecstatic, sharp, throbbing pain so unbearable it would send you in agonized tears to the tooth drawer to have the offending worm pulled out, tooth and all.

The tooth worm is one of those phenomena seemingly shared across cultural and geographical boundaries and throughout the entirety of human history. The Cherokee reported toothache as “a mere worm that has wrapped itself round the base of the tooth.” The native word for “toothache” in Madagascar—many miles from Cherokee territory—means “poorly through the worm,” and an ancient Egyptian papyrus from 1200-1100 BC tells a story about a bureaucrat stuck at a desert outpost complaining “the worm gnaweth at his teeth.”

The tooth worm even has an origin story. The dental historian Malvin E. Ring, in his illustrated history of dentistry, shows a clay tablet from Babylonia that tells the story of the tooth worm’s creation:

The worm went weeping, before Shamash, His tears flowing before Ea:

‘What wilt thou give me for my sucking?’

‘I shall give thee the ripe fig and the apricot.’

‘Of what use are they to me, the ripe fig and the apricot? ‘Lift me up and among the teeth

‘And the gums cause me to dwell! ‘The blood of the tooth will I suck,

‘And of the gum will I gnaw the roots!’